Hellooo& welcome to blogtober day 20! As you can tell, i have been loving the tag’s on my blog, and i recently came across @loulabxlle tag on her blog, which you can check out here: Lauren’s tag 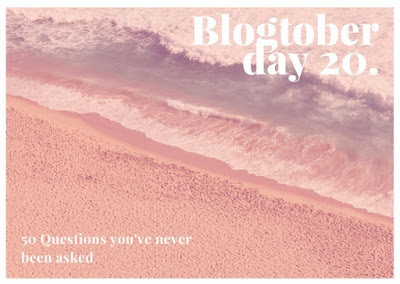 1. What’s your favourite candle scent? I like a cotton and clean scent, i don’t like anything too overpowering. I like the white company candles for their scents.

2. What female celebrity do you wish was your sister? i would like someone like Cheryl to be my sister, as she didn’t have the best upbringing but she turned it all around for herself, and done really well for herself, i would love to get some advice from her as well.

3. what male celebrity do you wish was your brother? I would like some like David Walliams to be my brother, as he is hilarious and he seems like a nice guy!

4. How old do you think you’ll be when you get married? Probably late 20’s but life is a funny thing!

5.Do you know someone who is a hoarder? Yeah, myself! I have to keep everything, in case i need it for the future haha!

8. How many oceans have you swam in? I haven’t swam in any oceans unfortunately.

9. How many countries have i visited? I have visited Spain, Turkey, Egypt, France, Ireland and America. 6 countries in total!

10. Is anyone in your family in the army? Nope, but my Great-Grandad used to be in the Army!

11.  What would you name your daughter if you had one? Lydia or Olivia

12. What would you name your son if you had one? Probably something like Caleb, Charlie or Oliver.

14. What was your favourite TV show as a kid? Defiantly tellytubbies or tweenies. Tweenies to the extent i wanted to call my little brother Milo!

15. What did you dress up as on Halloween when you were 8? Maybe a witch, i always used to love the witches dresses, hat and straw broomstick!

16. Have you read any of the Harry Potter, hunger games or twilight series? I have read the twilight series only because everyone else was reading it, LOL!

17. Would you rather have an American accent or a British accent? Defiantly an American Accent!

18. Did your Mother go to university? Nope, and neither am i! I don’t like the idea of going to uni!

19. Are your grandparents still married? Yes, such a long time!

21. Do you know who Kermit the frog is? Of course, aren’t the memes like everywhere;)

22. What’s the first amusement park you’ve been too? Disney Land Paris or Chessington

23. What language, besides your native language, would you like to be fluent in? Spanish! I really want to learn Spanish!

24. Do you spell the colour as grey or gray? Grey.

27. Do you prefer titanic or the notebook? The notebook!

28. Have you ever had Indian food? Yes, i’m not too keen on it though!

29. What’s the name of your favourite restaraunt? Either Nandos (who doesn’t?) or Chiquitos

30. Have you ever been to Nando’s? From the previous question, i think we know the answer… YES!

31. Do you belong to any warehouse stores? Not currently.

32. What would your parent’s have named you if you were the opposite gender? Jack, i have been told this!!

34. Who’s your favourite person in the world? My Mum and my 2 best friends: Amy&Dominique!

35. Would you rather live in the countryside or the city? Tough question. I live near the city now, and i love the buzz of the city, and the fact that there is so much to do in the city. On the other hand, countryside has so much tranquility to it!

37. Do you sleep with a nightlight? No, i can’t sleep with any light on, it has to be pitch black!

38. Do you eat breakfast every morning? Yes- i have too! I either have cereal or fruit and yogurt.

39. Do you take any pills or medication daily? Yes- i take my epileptic medication twice everyday!

40. What medical condition do you have? Epilepsy- i have a blog post all about my epilepsy here: http://lifestyleandcookies.blogspot.co.uk/2017/10/i-have-epilepsy-day13.html

41. How many times have you been to the hospital? 4 times. 2 for my epilepsy and 2 for sprains!

42. Have you ever seen finding nemo? Of course!

43. Where do you buy your jeans? Either New look or topshop!

44. What’s the last compliment you got? From a girl who said she liked my makeup!

45. Do you usually remember your dreams in the morning? Not really, sometimes but not really.

47. How many pair of shoes do you currently own? About 6

48. What religion would you raise your child to practice? I’ve been Christened, but i don’t practice it. So it would be up to my child if they wanted to be religious or not.

50. Why do you have a blog? I love writing my thoughts and feelings down, and sharing it with people, and knowing that i can have a voice through my blog i  love it!

I hope you enjoyed this,
Amy x

Blogger who loves to talk a bit about everything! View all posts by Amy Bell